Cryptocurrencies have been under fire in recent weeks, with the price of Bitcoin and Ethereum falling 26% and 36% respectively from their yearly highs set in mid-February. However, this may prove to be nothing more than a counter-trend correction, as both digital assets bounce off of key support and accelerate higher.

Moreover, the endorsement of the cryptocurrency market by two major investment banks, Citigroup and Goldman Sachs, could further validate the digital currency market and intensify capital inflows in the near term. Citigroup’s Global Perspectives and Solutions thinktank stated that Bitcoin could become “the currency of choice for international trade”, while Goldman plans to offer Bitcoin futures by the middle of this month.

This comes on the back of Bank of New York Mellon’s statement that it would treat BTC the same as any other financial asset and Mastercard’s commitment to integrate Bitcoin into its payment network. Tesla also announced a $1.5 billion investment in Bitcoin and plans to begin accepting it as a form of payment. These developments will probably underpin both Bitcoin and Ethereum in the coming weeks and may even result in resumption of the primary uptrends extending from the March 2020 nadirs. Here are the key levels to watch for BTC/USD and ETH/USD. 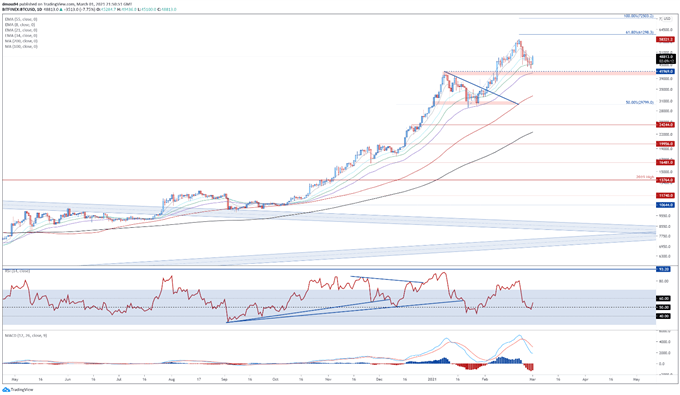 The formation of a bullish Hammer reversal candle at the 34-EMA (45176), followed by a Bullish Engulfing candle as validation, suggests that Bitcoin’s 7-day correction lower could be at an end.

With the RSI bursting back above 50, and the MACD tracking firmly above its neutral midpoint, the path of least resistance seems skewed to topside.

A daily close back above psychological resistance at 50,000 would probably intensify near-term buying pressure and generate an impulsive push to retest the yearly high (58,321). Hurdling that brings the 61.8% Fibonacci (61298) and 65,000 mark into the crosshairs.

However, if 50,000 holds firm, a more extended pullback to former resistance-turned-support at the January high (41969) could be on the cards. 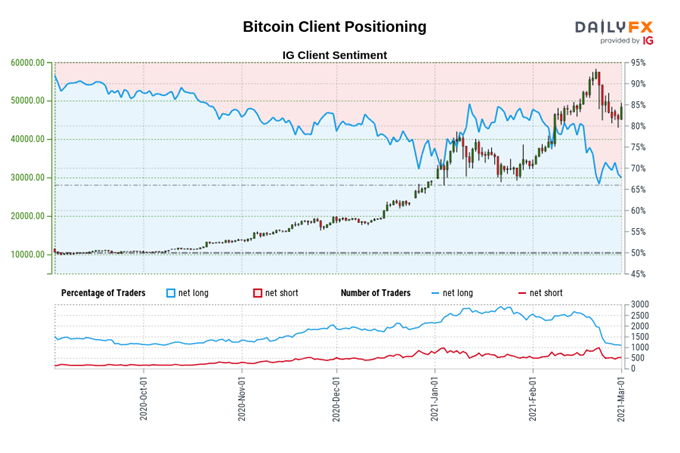 We typically take a contrarian view to crowd sentiment, and the fact traders are net-long suggests…

SOS Stock: Is it Buy the Bounce or Run Like Hell?