When the novel coronavirus first reared its ugly head stateside, the case for gold-related investments became an obvious one. Specifically, big mining companies, such as Barrick Gold (NYSE:GOLD), made the most sense for average investors. Reasonably levered to the bullishness in precious metals pricing, GOLD stock offered upside potential without the need for holding physical assets. 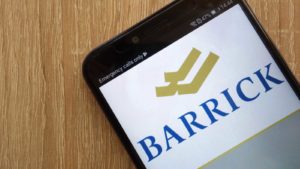 Lately, though, the mining complex has suffered some volatility. First, the underlying gold market has been moving in a sideways motion. It’s almost as if traders are anguishing over the real trajectory of the U.S. Second, the surprisingly positive May jobs report didn’t do GOLD stock any favors. In fact, shares dropped conspicuously on the news.

Does that mean the case for precious metals is done? Honestly, I’m more of a cryptocurrency fan rather than a gold bug. Sure, traditional safe-haven assets will always have their place. But with millennials and especially Generation Z, the investors from these demographic categories have been reared in the digital age. Thus, bitcoin is more intuitive to the current generation.

However, that doesn’t mean gold is now irrelevant — it’s far from it. For one thing, the initial jobless claims remain stubbornly high. In the week ending June 6, more than 1.5 million workers filed for unemployment benefits.

True, some of this comes from the massive backlog that we have seen over the past 12 weeks. At the same time, permanent job losses are also increasing, which adds uncertainty. Cynically, this incentivizes a hedging strategy, which in turn bolsters GOLD stock.

Social Unrest Is a Perfect Catalyst for GOLD Stock

When the government released the April jobs report, the employment picture was exactly what we thought it was: ugly. In that period, the economy hemorrhaged 20.5 million jobs. To get a better comparison, economists had to bring the Great Depression — not Recession — into the discussion.

But just like the May report, April’s data had some unusual metrics that caused some head-scratching. Specifically, the average hourly earnings of all private-sector employees increased nearly 5% from March to $30. How could this be when we saw such devastating labor market losses?

According to the Washington Post’s Andrew Van Dam, the answer is a sad one. As you know, the pandemic has disproportionately impacted lower-income earners as well as disadvantaged communities. Specifically, Van Dam notes that “Among the lowest-earning workers, about 35 percent lost their jobs. While in the highest-earning fifth of the private-sector workforce, just 9 percent did.”

With the government no longer counting those without jobs as earners, we saw average earnings increase. However, you can look at this uncomfortable statistic in two ways.

From one angle, the increase in average earnings demonstrates that the economic devastation has yet to hit white-collar workers en masse….

Market Wrap: Stocks Rally on Possible Stimulus but Bitcoin Is Flat at ...

Grayscale’s Trust Is Hungry For BTC